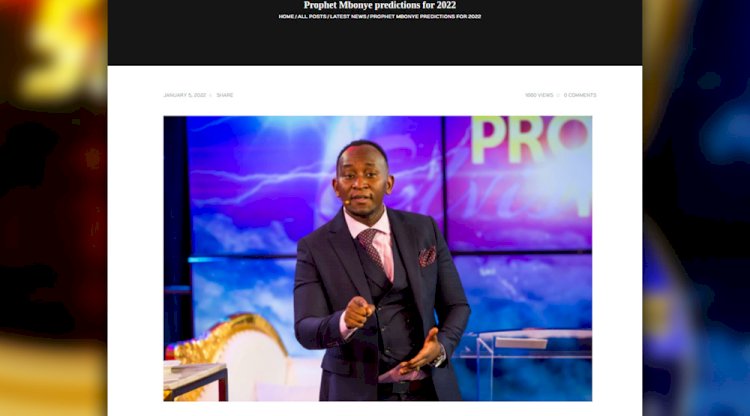 Prophet Elvis Mbonye of Zoe Fellowship Ministries has scratched on some of his prophecies for 2022, hinting at unleashing them at a later date. He said some of the occurrences would be catastrophic, one in Rukungiri and others in several African countries.

Mbonye, who was on Tuesday livestreaming his fellowship to his followers on social media, said he usually sets aside the end of the year, around December 26-31, to get his prophetic revelations.

This time, on December 31, 2021 after saying his morning devotion, at about 4:35am, he went back to sleep. He said he was not really in “the mood of picking stuff in the spirit”, but he was suddenly “carried to some place” while sleeping.

“I start to see things. And I know these are things for this year. I saw things. Some things were concerning – some islands being evacuated. I started to see certain people in authority… global authority – a certain scandal revisiting them,” he said.

Mbonye said there were about eight things in total, that he saw. He, however, said he didn’t want to substantiate online for every “TD and H” to access his visions from heaven.

“I saw certain things that I still would want only to share with you on the grounds (Zoe Fellowship venue),” he said.

The flamboyant preacher reiterated that he wouldn’t give specifics because of people who tuned in only for his 2022 prophecies. But he shared a little more. He claimed he knew what was going to happen in Uganda, South Africa, Zimbabwe, Kenya and Egypt this year.

When he returned to things to come in Uganda, Mr Future (his cool name) said: “I know what is going to happen to a certain prominent man in Rukungiri”.

Mbonye claimed after receiving the prophecies of 2022, he was joined by angels with whom he sang a beautiful song in English.

At end of the sermon, he went round touching the hands of his choir and crew of about 20 in attendance, “making them multimillionaires” as the adoring team received the blessing with emphatic Amens.

Mbonye then stretched forth his hand to his followers in the room and online as he declared: “You are going to enjoy life. The way I enjoy it!”