So, what if someone foretells the Oscars? 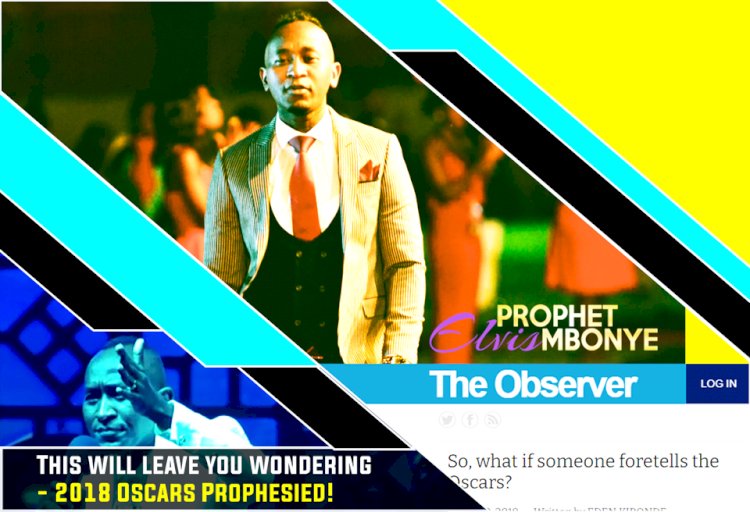 Last year Prophet Elvis Mbonye foretold the outcome of the Oscars before even the nominees list was out and it came to pass with customary accuracy.

While this drew much enthusiasm among some, almost in equal measure, it attracted a number of skepticis with some questioning the relevance of a gospel minister foretelling the results of the secular event such as the Oscars.

Unmoved Prophet Elvis again correctly foretold this year’s Oscar outcome on January 2, and the cynics have revisited the old script.

But I could as well ask; so what if an octopus rightly predicts results of some football games?

Few, if any at all ever posed that question in wake of the 2010 World Cup when Paul the Octopus became an overnight global sensation leaving quite an impression on the tournament, alongside Andres Iniesta that scored the World Cup winning goal for Spain.

This set in motion a quest for the next Paul the Octopus, sort of like America’s next top model. April the giraffe took a shot at becoming the next Paul, foretelling the result of the 2018 NFL Super Bowl but missed it.

That a four-legged mammal fell short of filling the shoes left by an eight-limbed creature perhaps should not have shocked any one.

To an extent, humans, too, that have exhibited any form of these futuristic powers have been appreciated. For centuries now French astrologer and physician, Nostradamus continues to baffle many with every prophetic fulfillment of events he wrote in a book that was first published in the 15th century.

But the glorification of people with this special gift has not been wholesomely extended to those that identify as Christians, especially born again Christians, and more specifically the prophetic ministry which is at the forefront of the church today.

People’s reception of the prophetic ministry today is a stark contrast from the Biblical day.

Take an example of Nathanael’s encounter with Jesus in John 1:47. Jesus saw Nathanael coming toward Him, and said of him, "Behold, an Israelite indeed, in whom is no deceit!"

This is similar to you a Ugandan meeting a stranger in and they tell you that you’re a Ugandan with a pure heart. I doubt that would be considered a prophecy by many today. It could most likely be met by a “daaaaah” and rolling eyes.

But Nathaneal was not that kind. Totally shocked, he asked: "How do You know me?" One more prophetic revelation about his prior station under the fig tree and Nathanael was sold out. "Rabbi, you are the Son of God! You are the King of Israel!" he said.

Herein is one of the major purposes of the prophetic; that’s to open people’s hearts to the heavenly Father that knows and is touched by every detail that concerns them; that thereafter they may believe.

Jesus revealed as much when preparing his disciples for His impending death and eventual resurrection; “Now I tell you before it come, that, when it is come to pass, ye may believe that I am he.” (John 13:19).

And when explaining the deeper purpose of his prophecies, prophet Elvis Mbonye once revealed that: “The reason I do things is to draw attention to God. To bring credibility to a living God who knows you by name, by number, by every detail, that you might believe Him. And believe every word that precedes from Him that it’s authentically true.”

Some prophetic revelations are signs, not the end. A case in point is the July 16, 2013 revelation by Prophet Elvis about the release of the donor funds by a number of countries. This prophecy came in the wake of the GAVI funds freeze due to massive corruption allegations at the time.

A week after the prophecy, there was news of the freeing of the hitherto blocked Shs 57 billion GAVI vaccine funds.

But the prophet had revealed that the release of the funds was not the celebration itself among believers, but it was a sign that, “the harvest is now. That you may believe the word of God.”

Now that Prophet Elvis correctly foretold the outcome of the 2018 Oscars, what does it mean to you? If you’re an actor, could it be a sign that this same God can take you to the top of the movie industry?

If you’re a businessman, could it mean that this God can turn your business into a top global brand?

Whatever your profession, could it mean that you should start thinking and planning on the Oscars’ level, and above? For the God that foretells the Oscars can take you further than the Oscars.

Consider Nathanael’s encounter with Jesus. On seeing Nathanael, Jesus said: “Behold, an Israelite indeed, in whom is no deceit!”

Nathanael possessed a pure heart towards God, unlike many today that have steadily and heavily fed on a diet contemptuous of Biblical Christianity and have been “wisely cautioned” against false prophets to the extent of entirely disregarding that ministry.

Such cannot receive this, till they unplug from their sources of information and plug into God’s word with renewed hearts.

Otherwise they’re more likely to continue glorifying astrologers and revering the likes of Paul the Octopus.

To which end they should look out for Nika the Polar Bear, who is being trained to take on Paul’s mantle at this year’s World Cup in Russia.
[email protected]