Remembering The 2010 Kampala Bombing: Was It Prophesied? Survivors’ Side Of The Story Told 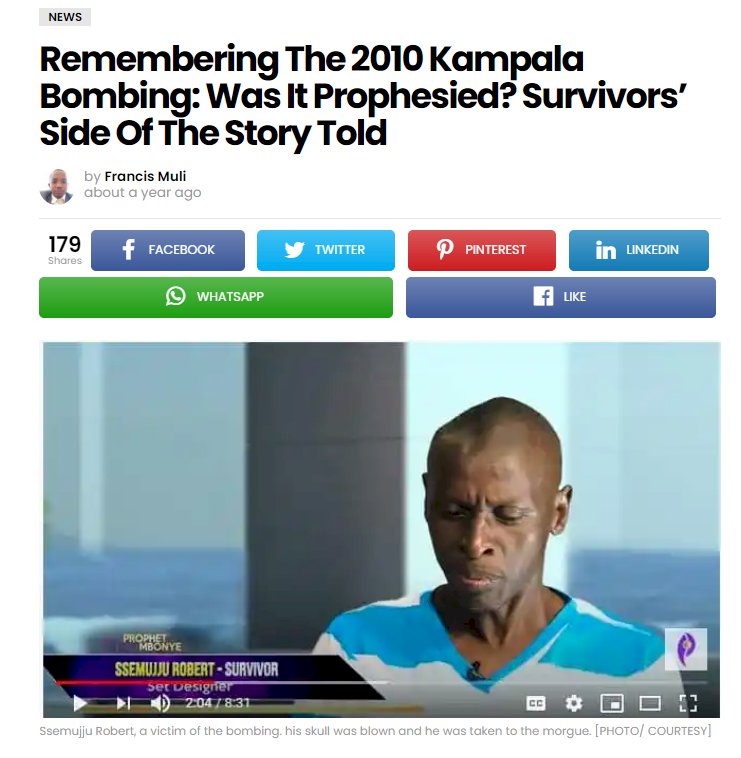 Ssemujju Robert, a victim of the bombing. his skull was blown and he was taken to the morgue. [PHOTO/ COURTESY]

On July 11, 2010, at least 74 people were left dead and 80 others suffered serious injuries, after terrorists twin-bombed crowds that were watching the 2010 soccer World Cup in Kampala, the country’s capital.

One of the survivors, Mr SSemujju Robert, had his skull blown and taken to the morgue after he was suspected to be dead. He later woke up, and was treated to full recovery but the scars are still visible.

“I was sited watching the match. I did not know what happened. My skull had been blown and (my head) was open. I think God never wanted to see that situation. After the bombing, I went straight to the mortuary,” recalls Mr Robert.
The bombings took place at the Kyadondo Rugby Grounds and Ethiopian Village, where hundreds were watching a football match between Spain and the Netherlands.

Mr Robert admits that he knew about a prophecy of the attack by Elvis Mbonye of Zoe Fellowship Ministries in Uganda.

“The man prophesied about it, meaning God had told him what is going to come,” says Robert.

But how serious should this man be taken concerning the said prophecy?

According to veteran sports journalist Joseph Kabuleta, the bombing had been prophesied by Mbonye during one of his seminars.

“I had been at a fellowship a month or two before (it happened). When he talked about a terrorist attack, he said “I see a terrorist attack that is going to happen here in Uganda let’s pray about it’. I think there was a bit f covering because of the prayer. I am told there were other different spots targeted, but they only managed the two,” says Kabulleta.

Kakooza Fredrick, a survivor of the attack describes the scene of the attack as one of the most traumatizing. He says that when the bombs went off, he felt like somebody was trying to burst his eardrums.

The same sentiments are echoed by Judith Akankwasa, another survivor.

“We were screaming ans scampering for our lives. Very few of us had sensed that this was an attack. What made it more (scary) was the sound behind us of a second explosion. I’m seeing people calling names, every kind of names. ‘My sister, my brother, I can’t see my boyfriend’, ” narrates Akankwasa.

“I was astonished that a man of God had prophesied about this and warned people that it was going to come,” she adds.

A teacher, Ms Anita Bananuka, who attended Elvis Mbonye’s conference during which he prophesied about the attack says she believed that the prophesy had been fulfilled when her sister confessed that she knew three people who died in the bombing.

Kakooza Fredrick believes that the state (government) should always take seriously any prophecy from Elvis Mbonye.

Read: I Was Pushed Out of Mediamax For Criticizing the President, Now I’m Being Threatened – Pr Migwi

“The state should come out and respect the Word of God that comes from Prophet Elvis Mbonye because he has been saying things and they come to pass. He prophesied about Trump, the choppers (crashes) and the bloodshed that happened in Lubuk. Now, why don’t you talk to such a person, why don’t you listen to him?” he poses.

Fredrick is talking about three Somalia-bound Ugandan Mi-24 attack helicopters that crashed at Mount Kenya killing seven soldiers and injuring 21 on August 13, 2012. He had allegedly predicted the crash.

In Mr Elvis Mbonye’s book Tasting the Powers of the Age to Come, the preacher said he forewarned his followers of Uganda’s darkest episode on May 2010 at the Hotel Triangle.

“I could see a group of terrorists plotting an attack on Kampala. It was an Islamist group based in Somalia. Therefore, at the conference, I informed those in attendance what I had seen, invoking prayer from them about the situation,” he wrote.

Here’s the Video of the narration by the survivors and witnesses:-

This July, Uganda will be marking 20 years since the attack happened.

According to video clips posted online, Elvis Mbonye has Prophesied several events that have come to pass, but the interpretation on whether he is a true or false prophet, that we cannot determine.

For instance, on January 2, 2018, a video posted on YouTube shows that Elvis Mbonye predicted correctly the winners of the Oscars Awards 2018.

In one of his predictions, he said that a 2007 come-of-age romantic drama play Call Me By Your Name would win an award, and James Ivory got awarded for the play in the Best Adapted Screenplay category.

He also predicted that Coco would win the award for the best animated feature, which it did. For the Best Production Design, Mbonye predicted that the movie The Shape of Water would win, it did.

For the Best Film Editor Award, he predicted that Dunkirk would win, which it also did. The Award for the Best Actor went to Garry Oldman.

You can listen to the predictions here:-

He also predicted a storm during President Donald Trump’s inauguration in February 2017, which he said could be symbolic or direct. Despite the weatherman predicting a hot day during the inauguration, there was actually a storm, and according to Mbonye, the protests held in many parts of US was another form of storm.

He had also predicted the win of Donald Trump as the 45th President of the United States of America.

Here in Kenya, he predicted the win of President Uhuru Kenyatta as the fourth President of Kenya.

According to the videos, he also predicted the resignation of David Cameroon as the UK Prime Minister four years before it happened, and his place taken by Theresa May.

In another video, he foretold the xenophobic attack in South Africa, which he termed as social unrest. The prophesy happened in January 2015, and the actual attacks came to happen in April 2015.

Two years before former Zimbabwe President the late Robert Mugabe resigned, Mbonye foretold it, saying that another person who was ‘yearning’ for the seat would be given the opportunity. He was alluding to Emmerson Mnangagwa, a former Vice President.

In January 2018, Mbonye also foretold of a two-tier parliament in Uganda, and by October the same year, leaders were pushing for the same led by former Prime Minister Amama Mbabazi.