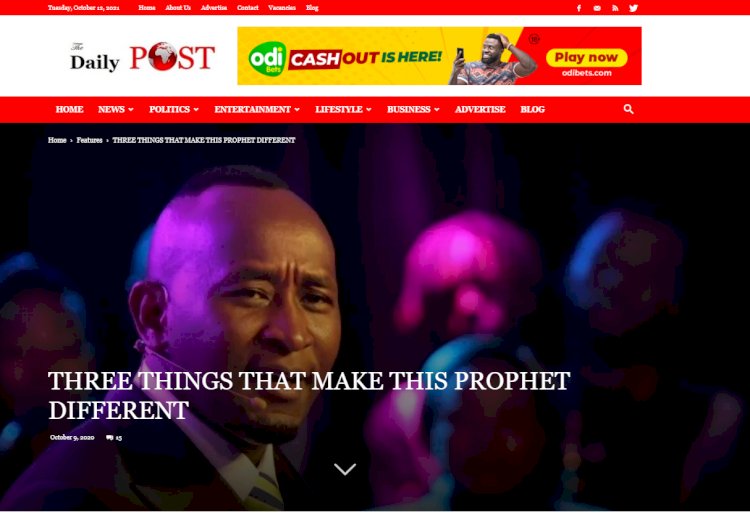 It seems like there is an unusual craze to use the title prophet within the religious circles. Controversial as it is, more and more people are embracing and using the title prophet today more than ever before in the history of the church.

Who really is a prophet and what qualifies one to use the title prophet? Are prophets trained in Bible school or they are just naturally or divinely gifted? Many people are known to display psychic abilities, one would wonder, does this make them prophets? There are so many questions revolving around this topic of prophets and the rise of many fake ones who have deceived millions of people across the world is not helping at putting these concerns and questions to rest.

While it might seem rather obvious that prophets prophesy, you would be surprised to note that many of them actually do not accurately and consistently foretell the future. Prophet Elvis Mbonye is on record having prophesied about the Corona virus, Donald Trump election win, Donald Trump impeachment and Brexit among several other news breaking international events. He has consistently (almost weekly) released one prophecy after another and so far none of them have failed to come to pass. Below are some of his prophecies

As many churches were excited to resume services whilst following strict health and government regulations, Prophet Elvis Mbonye is on record saying that there was no way he would re-open his fellowship under the given guidelines. His fellowship goes by the name Zoe fellowship and attracts a crowd of over 8,000 people every Tuesday in the heart of Uganda. Prophet Elvis recently did an online press conference and termed the regulations as demonic and called on other men of God to reject them and remain true to their call. He continued to say that it does not make sense for spiritual matters to be governed by science, as God is superior to everything including science

The anointing on a true man of God should be evident to all. Divine endowment is not just talked about but it should manifest in power that is exercised and experienced. Men of God are not mere motivational speakers and the divine power in them must be able to change situations in peoples lives and in the world, just as it is recorded in the Bible. There is not a single day that Prophet Elvis has preached and he has failed to perform miracles and to prophesy. Through his weekly online broadcasts that attract at-least 15,000 live users ever week, Prophet Elvis has displayed that God is not limited by space, time and distance. Healings and numerous miraculous wonders have manifested and testimonies have come in from all corners of the world. Here is the link to his facebook page

This and every Sunday NTV gives you an opportunity to interact with this particular prophet. Currently the most highly rated show in Uganda, The Power of Prophecy with Prophet Elvis Mbonye will be airing on NTV Kenya from 9am this and every Sunday. Watch it and be the judge.

By King David The Greatest