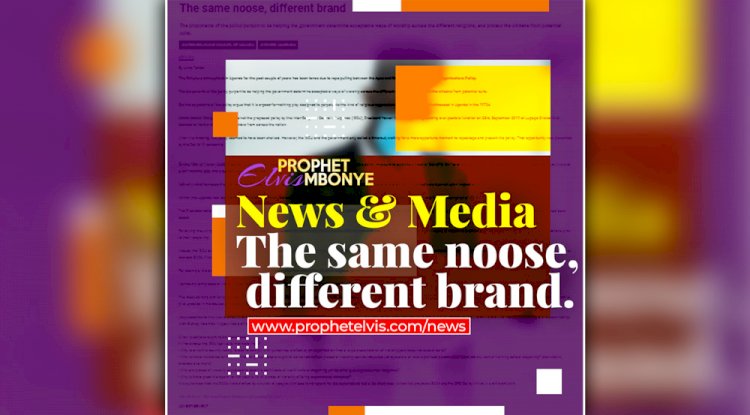 The proponents of the policy purport to be helping the government determine acceptable ways of worship across the different religions, and protect the citizens from potential cults.

The Religious atmosphere in Uganda for the past couple of years has been tense due to rope pulling between the Ayes and Nays of the Religious Faith Organizations Policy.

The proponents of the policy purport to be helping the government determine acceptable ways of worship across the different religions, and protect the citizens from potential cults.

But the opponents of the policy argue that it is a-good-for-nothing ploy designed to perpetuate the kind of religious oppression and suppression last witnessed in Uganda in the 1970s.

At the peak of the public outcry against the proposed policy by the Inter-Religious Council of Uganda (IRCU), President Yoweri Museveni, while presiding over pastors function on 23rd, September 2019 at Lugogo Cricket Oval, decided to have a meeting with pastors from across the nation.

After this meeting, the policy seemed to have been shelved. However, the IRCU and the government only called a time-out, waiting for a more opportune moment to repackage and present the policy. That opportunity was presented by the Covid-19 pandemic.


On the 18th of March, 2020, President Museveni banned all public and religious gatherings countrywide as a safety measure to curb the spread of Covid19. On 1st of April 2020, a general lockdown was imposed. However, two and a half months later, the president eased the lockdown.

Not only were non-essential workers back to work, but also, public transport, salons, malls, downtown markets, Kikuubo, and eventually, arcades were opened upon inspection and approval of opening the same.

At the time Uganda had registered a 90% recovery rate amidst an ill-equipped health-care system and no deaths yet. Yet there was little or no regard for the resumption of worship back to normalcy.

The President deferred the opening of places of worship citing the former as the most dangerous setting from which the virus could be contracted by the very people present in every other location where the lockdown had been eased.

Following mounting pressure from various stakeholders, president Museveni commissioned the IRCU to work with the government ‘scientists' and Ministry of Health to draft safety measures specific to religious organizations prior to their reopening.

Indeed, the IRCU did what it has come to be known for - proposing stringent measures like it did with the botched RFO Policy! Standard Operating Procedures (SOPs) were presented and all places of worship are to comply with the decreed SOPs if they are to reopen any time soon.

For example, the elderly and children below 12years are exempted from attending physical religious gatherings.

Non-compliant places of worship shall remain suspended as they will not be issued with a certificate of worth - a condition necessary for reopening.

The most striking similarity between the RFO Policy and the SOPs is mainly brought out in Dr. Sserwada's version which, although it out-rightly bans political activities in places of worship, mandates leaders to allow government to give updates in the course of the service and health campaigns to be incorporated in the main announcements.

Acquiescence to this would amount to succumbing to suggested acceptable ways of worship by the state. More perplexing is the fact that different religious leaders have different versions of the SOPs that they are disseminating. Arch-Bishop Kazimba Mugalu has a different version, and so do Dr. Joseph Sserwada and Bishop Lwere.

A few questions ought to be addressed;
- Where does the IRCU derive its mandate from?
- Why is an entire country being forced to comply with guidelines drafted by an organization that a large cross-section of worshippers does not subscribe to?
- Why is there insistence on the fact that religious leaders ought to be trained before places of worship can be reopened yet operators of less organized places never received any sort of training before reopening? (downtown, arcades and malls)
- Why are places of worship supposed to obtain a certificate of worth before reopening unlike other public places that reopened?
- Why is there great disregard for the possibility of places of worship offering supernatural remedies?
It is quite clear that the SOPs were drafted by a bunch of people with less to no regard for the supernatural but a lot more clear is that the proposed SOPs are the RFO Policy whilst in a different skin.

The Writer is: The Head Public Relations of Crownel Co. Ltd