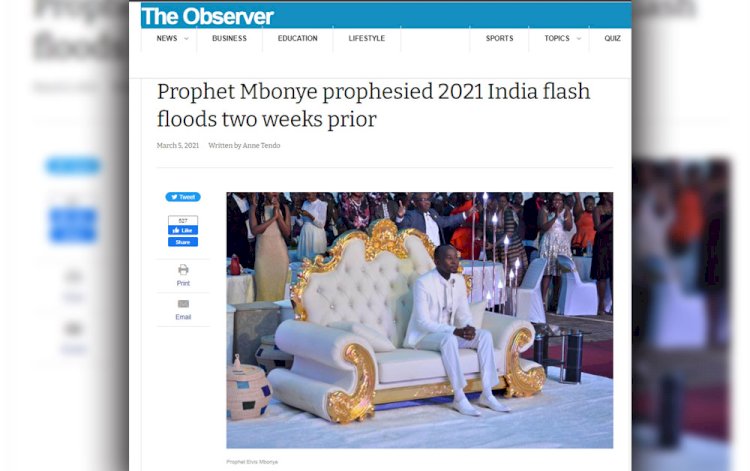 February 7, 2021 was a very dark day for India, more specifically, for the inhabitants of the Rishiganga valley. A Himalayan glacier broke off and crashed into a dam on the Alaknanda river in Uttarakhand state, causing an avalanche of water, mud, rock and ice that wiped out two hydropower dams, houses, bridges and roads in resultant flash floods.

To date, 37 hydroelectric dam workers are still reported trapped, 135 people are missing, and the death toll is at 70. The search for missing persons goes on. Many experts have blamed the incident on climate change.

High profile officials in India have blamed the incident on the construction of the dams in a very sensitive area - next to the Nanda Devi glaciers. It is important to note that this same area experienced flash floods in 2013 which left thousands dead and more than 3,000 injured. It is within the bounds of reason to conclude that given the magnitude of the February 7 incident, the deaths and disappearances could have been worse.

Two weeks prior to the Himalayan glacier incident, Prophet Elvis Mbonye Mbonye had a vision of the incident during his weekly Tuesday fellowship on January 26, 2021, that was broadcast on his Facebook page live.

In the vision, he saw a dark cloud over the nation of India. “And in a day there would be masses of deaths, but the Spirit of God said, ‘I shall be exalted, that the world will look to me and see life,” he said.

Soon after this, he instructed those in attendance to pray for the nation of India, for God’s preserving grace to prevail and that life would triumph over death. Anyone would have thought that in a time such as this, mass deaths would probably only be as a result of a spike in the Covid-19 pandemic. For a man who has been accused by skeptics of saying the obvious, it was very unexpected that what he saw would come to pass two weeks later as a natural disaster – something that does not have the hand of man in it.

In all this, two things stand out – it is not the first time Mbonye has delivered nerve-wracking prophecies in his weekly fellowship, and asked the congregants to stand in prayer. This demonstrates the role and relevance of the church today; it is the salt of the world, God’s restraining power standing in the way to ensure that the lives of many people are preserved.

During that specific online fellowship, Mbonye highlighted that Christians should be passed the level of seeing ominous things happening in visions, and later jubilate when they have come to pass.

“You ought to instead pray against such disasters so that lives may be preserved,” he directed.

Secondly, and most importantly, what will the nations do with a man such as this? In 2010, he prophesied the July 2010 Fifa World Cup bombings that claimed 79 lives in Kampala, and in August, 2012, he foresaw the impending UPDF chopper crashes.

He, however, not only delivered the prophecies but went an extra mile and tried to reach out to the authorities to request them to call off the flight to Somalia. His warnings were dismissed on grounds that a clandestine operation could not be called off merely on the grounds of a prophecy. The result of this ignorance and utter disdain for the prophetic ministry was the death of seven UPDF officials.

In his fellowship of January 26, Mbonye stated that when the nations harden to what the Lord has shown, then whatever has been seen happens. Will the nations begin to heed to the words of this prophet?