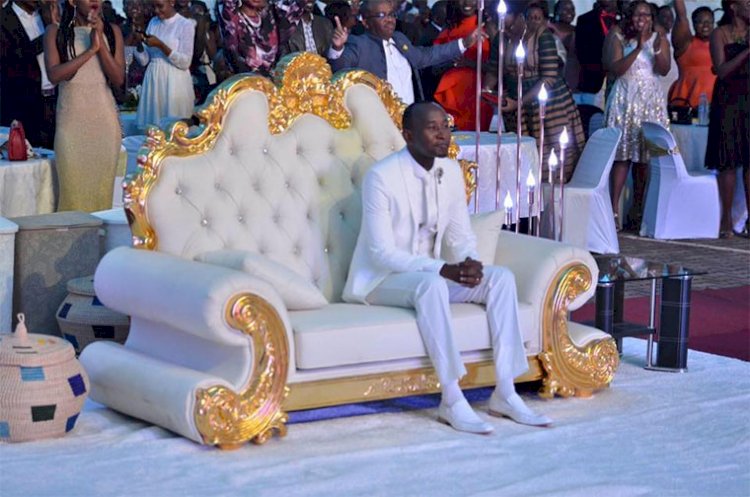 Prophet Elvis Mbonye of Zoe Fellowship Ministries has urged the Uganda government to put trust in God that He will protect the congregants from coronavirus disease (COVID-19) and open up places of worship.

In an interview with BBC Radio's Allan Kasujja, Prophet Elvis Mbonye says Uganda should follow the Tanzanian route which trusted God over science. Science calls for face mask-wearing while in public, bars mass gatherings and promotes a 2-meter social distancing between persons as measures to prevent the spread of COVID-19. Coronavirus cases and deaths have been on a steady rise for several weeks now - with two more deaths and a further 423 new cases reported today by the ministry of Health.

Asked how he and his followers are coping with the pandemic restrictions, Prophet Elvis Mbonye said his ministry is congregating online even though they do not consider it as sacred.

“There are certain prices that you will find omitted with online gatherings that you cannot consider as the perfect will God intended for us to gather.”

However, Kasujja pointed out that there is an argument that religious gatherings are part of the problem for the escalating COVID-19 cases worldwide. Reasoning that one way of preventing the spread of the coronavirus is to ensure that churches do not congregate, Prophet Elvis Mbonye said this is understandable from non-believing perspective.

“But when you abandon your faith in times of contrasting trials, then your faith should not be considered as something authentic,” he said.

It was at this point that Kasujja reminded him that there is a very thin line between faith and foolishness.

“Well, Apostle Paul says that ‘If I am a fool for God then so be it.’ The thing is, when you are person of faith, your faith speaks in all times, situations or circumstances,” retorted Prophet Elvis Mbonye.

Like schools, places of worship and religious gatherings are still under lockdown ever since Uganda reported its first coronavirus case earlier in March this year. Some places of worship have tried to adapt with special services online, others have closed completely under the government preventive rules.

A few months ago, some evangelical Christian leaders launched a campaign with the now universal 'I Can’t Breathe' to compel government to free religious gatherings but that was not enough to convince government to relax restrictions on religious assembly.

It is worth noting that neighbours Tanzania have taken a stance that God has rid them of Covid-19 and doesn’t have any restrictions on any form of gatherings. Asked to choose between Uganda’s scientific approach and that of Tanzania, Mbonye didn’t mince words.

“Definitely Tanzania. I disagree with the way Uganda has handled the situation 100 per cent. The Tanzanians put their faith to action and I know Tanzania will come out on top because it has put God above science,” he said.

“In the times we are living in where you have to consult science to practice your faith, you are basically saying that science is above God. That is something that is sacrilegious.”

Put to task to explain his stand on the existence of the coronavirus, Prophet Elvis Mbonye acknowledged its existence.

“I do not dispute it but what I am saying is that we are a people of faith and faith never changes,” he said.

Finally, Kasujja put him to task to reach out to President Museveni regarding the opening of churches, on which Prophet Elvis Mbonye said he would tell the head of state that “our motto says For God and my country and not for science and my country.”

The provocative interview reignites the debate on the fate of religious freedom of gatherings vis a vis the control of the spread of the pandemic, especially when put into perspective of the recent NRM political primaries that where huge political gatherings were tolerated.

And whereas Prophet Elvis Mbonye’s views have previously been echoed by several leading religious figures, there are some voices that have called for caution first.

“What we are told to do is very simple and this has nothing to do with lack of faith,” he said.

“Our churches have never been closed, but are under lockdown because of the dangers that we are faced with. It is very important for us to know the difference between closing churches and locking churches. When you lock, you do so for a period and then unlock. But to close, is to shutdown forever,” he said.