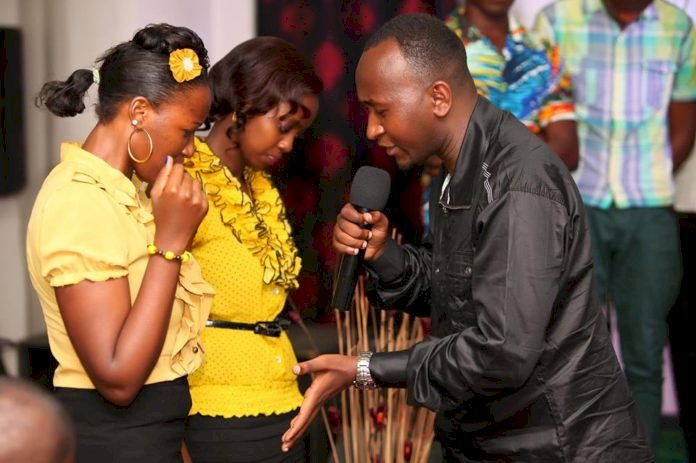 Prophet Elvis Mbonye of the Zoe fellowship ministries, foresaw the sacking of National Social security Fund (NSSF) deputy managing director in 2014, that is three years ago.
A video released by Zoe Ministries shows that Geraldine Ssali sacking at NSSF were prophesied by the flamboyant ‘man of God’ in 2014.

According to the video, the Mbonye on December 2, 2014, called out members of his fellowship who work at NSSF before telling them that “There is something about the children of God there [ at NSSF] ” then jumped out a number of employees from NSSF before the Prophet continues to pray “Lord as you have begun a new work there when we shall see the deputy shaking then we shall know Father that your household who are these your people shall start to ascend.”
Perhaps, the NSSF staff in attendance did not understand the prophesy, until the Fund’s deputy managing director Geraldine Ssali started getting problems with her boss and the board.

Early last year, Geraldine was sent on forced leave. She later went to court, which ordered her reinstatement.
However, when her contract ended, the Minister of Finance Matia Kasaijja, did not renew it. On the other hand, that of managing director Richard Byarugaba and CMO were renewed for five years.
According to Prophet Elvis Mbonye, the shaking of the Deputy MD meant ascendency for the children of God.
Did Mbonye really foresee this?
Prophet Elvis Mbonye has been criticized by many and labeled a modern ‘refined English speaking witch-doctor’, a fraudster, a manipulator and all sorts of things.

Pastor Solomon Male, of Arising for Christ Ministries and the Publicity Secretary – National Committee on Cults and False Teaching Awareness, prefers to call Elvis Mbonye, a speculator who carefully studies the trends and predicts the next course of events.
Male says, Mbonye’s followers who he prefers to call ‘fools’ then turn Elvis Mbonye’s speculations into prophecy.
‘‘None of his ‘prophecies’ have ever true’’ Male adds. Mbonye claims that in 1998, he was called by God in a supernatural encounter witnessed by his sisters. ‘ ‘I got saved and I immediately spoke in tongues. I had a vision of God calling me to be a prophet’’